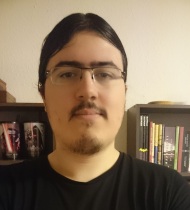 I am an earlier career researcher. My research is in the interdisciplinary fields of literature, game studies, and film studies. I am especially interested in narrative forms in different media. In the area of literary studies, my main interests are in the Old Norse and Old English Heroic Epic and in the Fantasy Novel.

In my research I focused on the relationships between Literature and other media, especially interactive narratives. This blog is the place where I share my ideas about literature and /or video games.